Snakes might be the most misunderstood, and even feared, critters in Maine! But despite their mixed reputation, most snakes are not dangerous to humans. In fact, I have always found them to be both fascinating and really beautiful.

Snakes come in a dizzying array of colors and sizes. Here in Maine, we have nine different species of snakes:

Fun Fact: None of these species are venomous at all! Many years ago, the occasional timber rattlesnake could be found in Maine, but this species is now believed to be extirpated, or extinct in our area.

Check out some photos of our native snakes below:

All snakes are cold-blooded, meaning their body temperature fluctuates with the temperature around them. This is why you will often see snakes “sunning” themselves on an exposed rock or even on the side of the road.  Both rocks and pavement (especially dark pavement) absorb and hold the warmth of the sun.

Being cold-blooded, snakes are true hibernators. Once the daytime temperatures dip below about 55 degrees, snakes will enter their dens and hibernate for the winter. Their metabolism slows down so much that they can survive on just the fat stores in their bodies. All Maine snakes hibernate in a den which must be properly vented, not too wet or too dry, and warm enough to keep the snakes from freezing to death. To help with this, certain species including garter snakes hibernate with other snakes in one big ball, so that they can share warmth. This is called a hibernaculum.

Snakes are carnivores, meaning they eat meat. Snakes are wonderful as pest control! They prey on or eat many animals that we consider pests and that can do damage to our gardens. In fact, red-bellied snakes love to eat slugs! 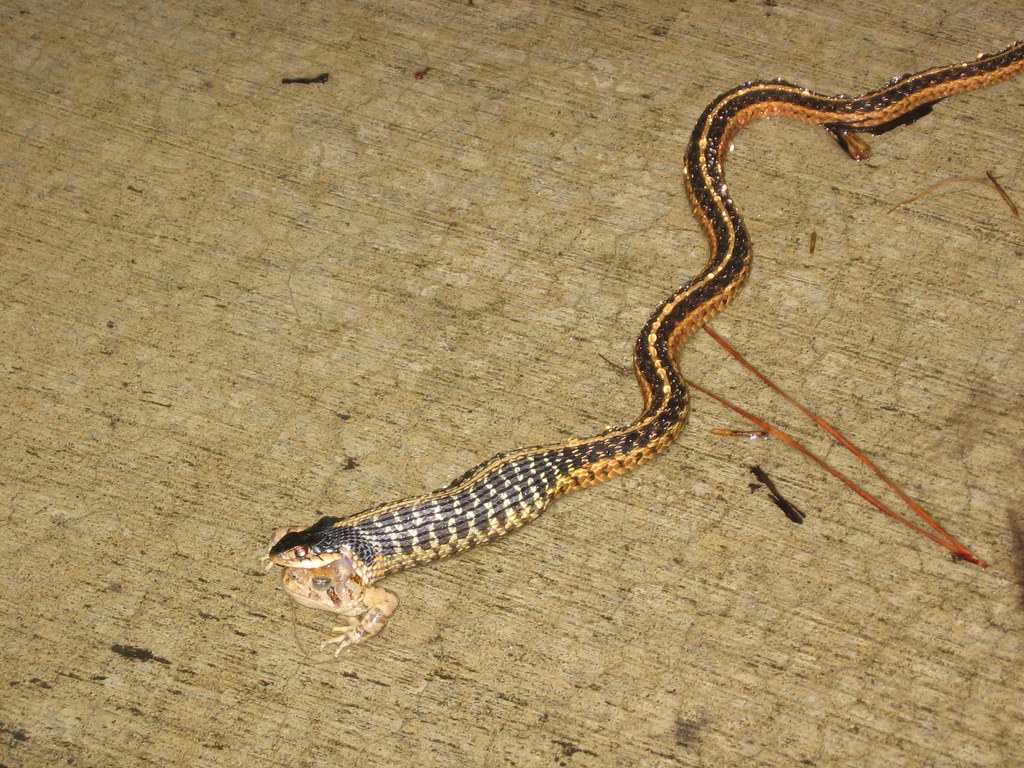 Snakes have hinged jaws which allow them to consume food that is larger than their bellies. That is why you can sometimes see a big bulge in a snake’s body: they swallow their prey whole. The prey will get pushed through the snake’s body to its stomach, where it will get digested and turned into fat that the snake can store in its body and live off of for extended periods of time.

If you have been lucky enough to come across a snake and observe it up close, you have likely seen it quickly flicking its tongue in and out of its mouth. Snakes have forked tongues that collect and deposit air molecules on receptors in the mouth. This allows snakes to “taste” the air, which helps them locate prey and sense their way in the dark. 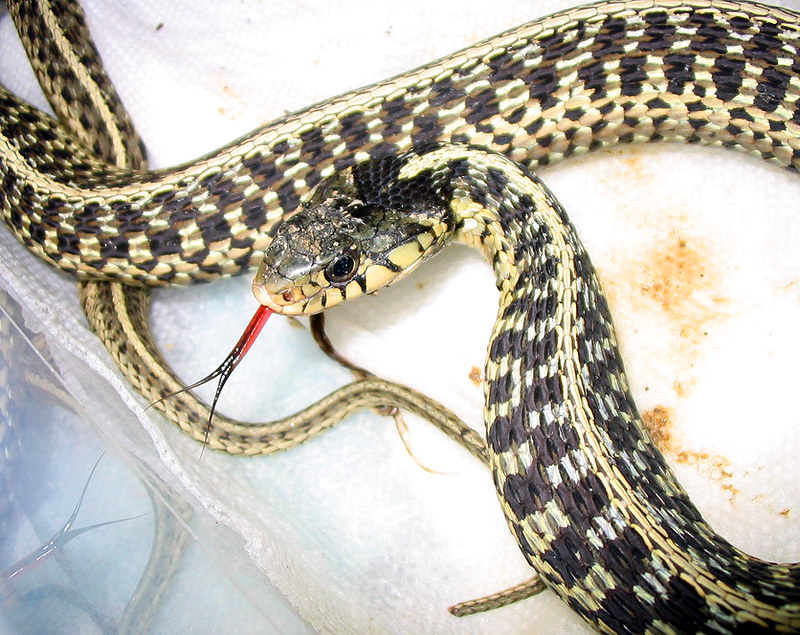 A snake relies on its strong muscles and scales to move its body. These strong muscles also make water snakes excellent swimmers. Their ability to stay perfectly still and camouflage into their surroundings or make a speedy getaway if necessary all aid in the escape from their own predators.  Many animals such as coyotes, foxes, opossums, raccoons, skunks, weasels, great blue herons, hawks, eagles, and owls prey on snakes. Sadly, humans, domestic cats and dogs, lawnmowers, weed-whackers, and vehicles also fatally wound or kill snakes.

Remember that snakes are more scared of you than you might be of them!  You are much bigger than any snake in Maine and viewed as a potential predator. Next time you spot a snake take the opportunity to admire, from a safe distance, the beauty and elegance of this often misunderstood creature.