The other day while I was in the car I spotted a huge group of crows hanging out at the tops of several trees. I’m not sure why, but I always find these large groups of gathering crows, referred to by some as a “murder of crows,” totally fascinating to watch. They always seem to be discussing things and deciding as a group what to do next when suddenly one, then a few, will take flight, soon followed by all the rest. It is quite a sight to see, and it got me wondering about these birds that we sometimes take for granted.

The common or American crow is, well, quite common here in Maine. They are large black birds measuring about 17 – 21 inches long including their beaks. Crows have a fan-shaped tail and a strong, stout beak good for eating a variety of foods.

Crows are typically rather noisy, gregarious, and very intelligent animals. Compared to most other birds in our area, crows have a very boisterous and loud call that is easily recognizable. Forget the neighborhood rooster; many of us have been awoken on an early summer day by the loud caw-caw or caa-caa of a crow.

Crows are often confused with ravens.  While both birds are black and have similar looking beaks, the raven is significantly bigger – think the size of a red-tailed hawk. Ravens also have wedge-shaped tails whereas crows have fan-shaped tails. The beak on the raven is even thicker than that of the crow, and if you manage to get a close look the raven has feathers that come down onto the beak. These might seem like small differences, but if you ever see the two birds next to each other you’ll be able to tell which is which. Crows are also more common than ravens. As they say in the birding community: “If you think it’s a raven, it’s a crow; if you know it’s a raven, it’s a raven.” 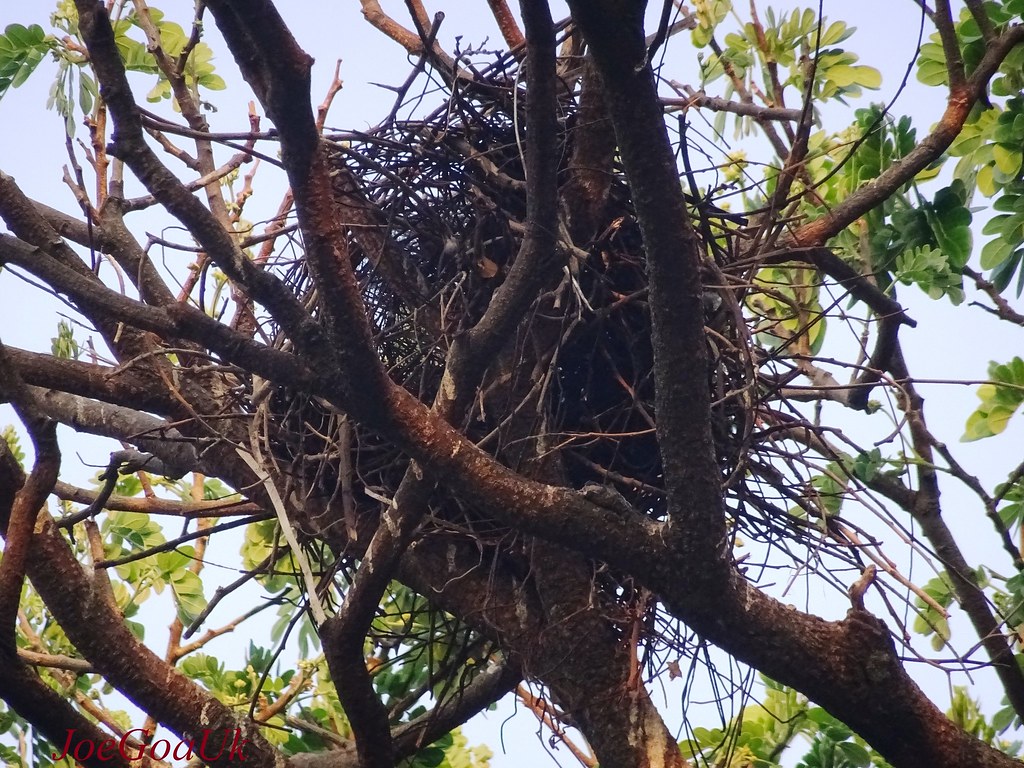 Interestingly, during nesting time crows are surprisingly secretive. Crows build large nests, about 12 inches in diameter, out of sticks, weed stalks, and vines, then line them with feathers, grass, and small roots. Crows generally place their nests in the fork of a tree, usually a coniferous tree, and they like to have them quite high off the ground, typically at least 40 feet. Crows may also nest on cliff ledges or occasionally on the ground. A female crow lays between three to eight blue-green eggs with gray or dark brown splotches. Both the male and female incubate the eggs for 18 days and care for the young once they hatch.  The chicks’ eyes are closed when they hatch, but start to see in the first five days. The young crows are fully feathered at four weeks and fledge, or learn to fly, by late June. They stay with their parents all summer and into the following year.

Once the young have left the nest, the crows gather together in large groups to roost. These flocks can grow to be as large as 100,000 crows in number. They roost together at night and break into smaller groups for feeding during the day. Remember in the beginning when I mentioned a “murder” of crows? That is actually an old term based on folklore or old superstitions.

Fun Fact: An adult crow eats approximately its own weight in food every day.

Crows are omnivores, meaning they eat both plant and animal matter, and they are really not very selective about what they eat. Their diet includes small rodents, eggs and baby birds, amphibians, seeds, nuts, berries, and corn. The largest portion of a crow’s diet consists of insects and carrion (dead animals), particularly during the summer. Research suggests that insects make up two-thirds of the crow’s diet. Beetles, termites, ants, and several other insect species are commonly eaten by crows. This can help farmers as a natural method of pest control and crop damage control. Crows also eat large quantities of carrion and can often be seen along roadsides dodging cars in order to scavenge animals killed on the road or at picnic sites cleaning up after humans.

Fun Fact: Crows, like owls, regurgitates indigestible material, such as bone and fur, in the form of pellets.

Crows can be found in forests and farmlands as well as towns and cities.  They are opportunistic birds and are able to occupy a wide variety of habitats and have always prospered in the presence of humans. According to ornithologists, crows and other members of the Corvidae family, like ravens, are some of the most intelligent bird species. Crows often travel and feed in large flocks. During feeding, one or two birds will act as a lookout while the others feed and at any sign of danger, the guards warn the rest of the flock. By working in this way the flock is able to feed more efficiently.

Another indication of their intelligence is the variation in their vocalizations. They can express warnings, threats, and sounds of happiness. Crows have also been known to interact with other animals such as wolves, coyotes, and mountain lions. A flock of crows may lead one of these predators to a carcass so it can be opened by the predator and thereby allow the crows to also feed on the carrion.

Crows are really fascinating birds to observe and play a critical role in any habitat or ecosystem they live in.  They are excellent pest controllers, help with crop pest management, and work to clear the forest of dead animal matter.  Next time you see and hear a crow, see if you can distinguish its various calls and try to imagine what it might be saying!