Welcome to Creature Feature, a series from the CELT education team highlighting local wildlife. Each week, we will share a short introduction to a local organism that you might encounter in your backyard or on our trails.

Recently, while walking along the Outer Loop Trail in Robinson Woods, I was treated with a visit from a big and beautiful barred owl. Initially, the movement of the owl caught my eye. The owl was very cooperative by landing on a clearly visible branch not too high up and not too far from where we were standing, giving us a wonderful opportunity to quietly observe each other.

Owls have a wonderful mystique about them and have been the focus of legend and folklore for thousands of years and across cultures all over the world. Here in Maine, we have three common species of owls: great horned owl, barred owl, and northern saw-whet owl. 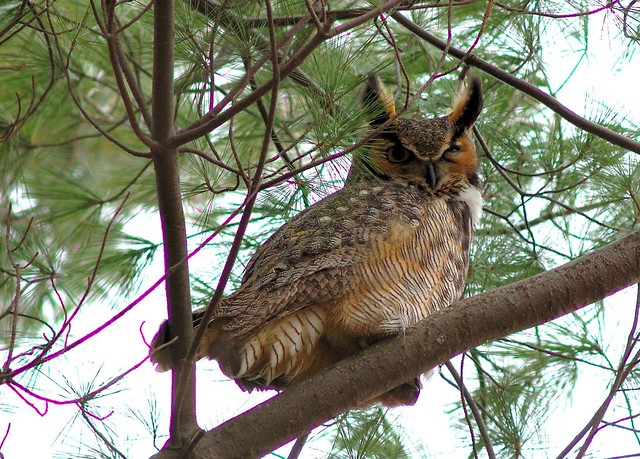 The great horned owl is easily recognizable by its large size and tufts of feathers near the ears.  The great horned owl is found in nearly every part of North America, excepting only the arctic and the Caribbean. It also has a very unique call. (In general, you will most often hear an owl before ever seeing it.) 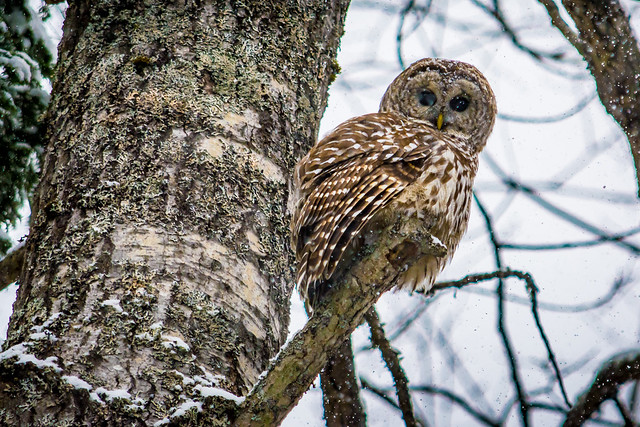 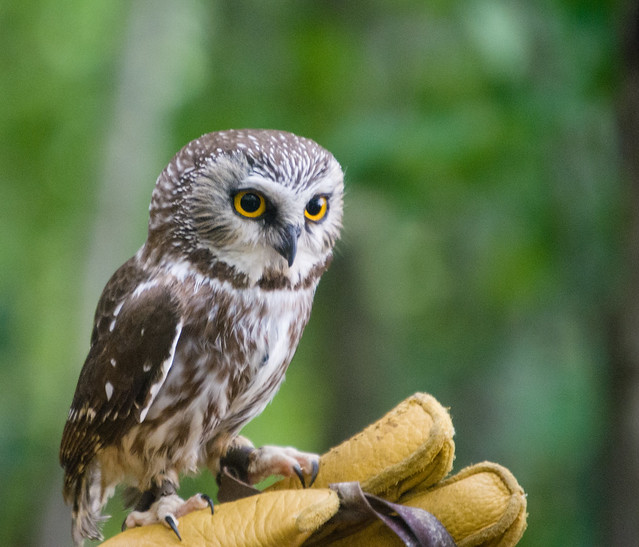 The northern saw-whet owl is the smallest of Maine’s common owls, with adults only about as large as a robin. Its call is said to sound like the repetitive squeaks of a saw blade being whetted, or sharpened.

Eight other species of owl have been confirmed in Maine, but are much less common:

Owls are carnivores, meaning they eat meat.  Owls are also predators and have many amazing adaptations that make them uniquely skilled hunters. As you may have noticed, the owl’s coloration provides it with excellent camouflage within the forest. It can be almost impossible to spot an owl in a tree unless it moves or you see it land or take off.  In addition to this visual camouflage, owls are able to fly without making very much noise.  Special feathers on the edge of an owl’s wing allow them to flap without making the “whooshing” sound that most birds make. These wing feathers are covered in small structures, like barbs, that disturb less air as it flows over the wing. In addition, extra-fluffy feathers on the owl’s wings and legs help absorb sound.  With these adaptations, owls can get very close to their prey before being seen or heard.

Owls generally hunt at night and have excellent night vision. They have very large eyes which capture lots of light. Because the eyes are so large, they cannot move their eyes within their eye sockets. Instead, they compensate by rotating their entire head to look around. Most owls can rotate their heads up to 270 degrees, meaning 3/4 of the way around, or roughly three times as far as a human.

Owls also have excellent hearing. The shape of an owl’s face and the layout of its feathers direct sounds towards their ears. Most owls also have asymmetrical ears, meaning one ear is higher on the side of their head than the other. This means that one ear hears sound from above slightly better while the other hears sound from below slightly better. The owl uses that very small difference to figure out location of its prey in both left-right and up-down directions.

Owls eat their prey whole, consuming it in its entirety.  They will use their very sharp beak and talons to rip the prey but they consume the entire prey. However, owls cannot digest bones, teeth, feathers, or fur. Instead, they have an ingenious way of solving this problem: owl pellets! Owls regurgitate, or basically throw up, the indigestible parts of what they eat. Their bodies perform a sort of sorting operation that allows the soft tissues to pass through and be digested while the indigestible parts get compacted into a single oval-shaped mass which is passed back up the digestive tract and spit out generally a few hours later.

You can learn a great deal about the food chain, animal anatomy, and principles of ecology by examining an owl pellet. If you know there is an owl in the area, look very carefully under a large tree and you may be able to find one!

Adult owls, especially from larger species like great horned owls, rarely have to worry about predators. Baby owls, called owlets, though, can fall prey to any nest foraging predator, including weasels, skunks, raccoons, or prowling cats. Owls provide excellent rodent control and will hang around an area as long as the food supply is strong.

There is something quite magical about owls and seeing them always feels like a special moment. Listen for owls calling to each other beginning around dusk and through the night. If you stand still and listen you can determine where the call is coming from and try to spot any movement. If you are lucky, you may get a glimpse of one of Maine’s magnificent owls.