This week is all about porcupines – maybe not the most cuddly of Maine mammals, but absolutely adorable and quite interesting in their own right! 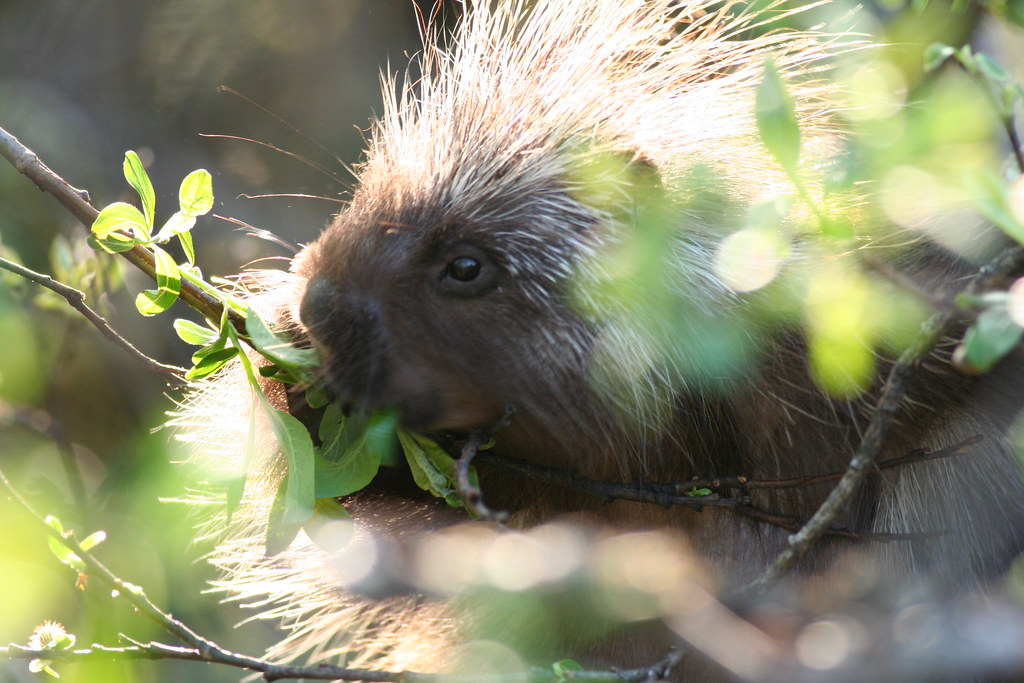 Porcupines are a medium-sized mammal that can be found throughout Maine and much of New England as well as the upper mid-west, western US, and Canada. Here in Maine, porcupines are brown to blackish, grow about 18-23 inches in length, and can weigh anywhere from 10-28 pounds.

Porcupines are famous for their quills, which they use for protection against predators. There are more than 30,000 quills covering the rear portion of the porcupine’s body, including the back, sides, and tail. The only areas with no quills are the porcupine’s face, its underbelly, and the insides of its legs. 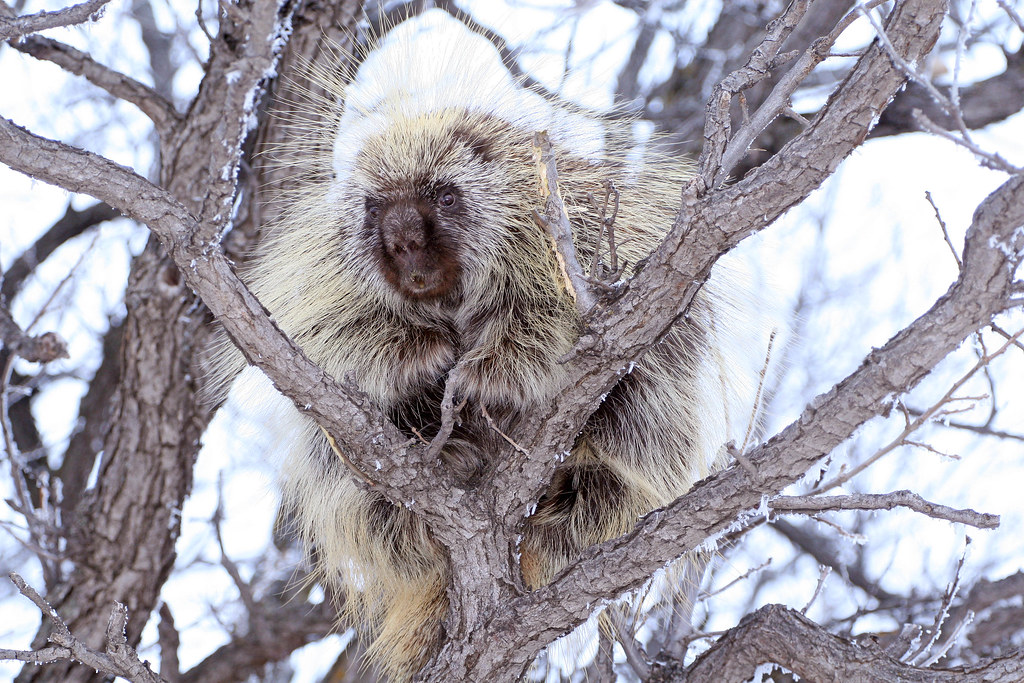 Despite popular folklore, porcupines cannot “shoot” their quills, but they are specially shaped for quick release. Each quill is up to three inches long and has small barbs on the end so that it will stick into a predator’s skin.   Because of this barb, the quill will continue to move through the predator at about one inch a day if it is not pulled out, and could eventually dig deep enough to hit an organ. This is why it is so important to have quills removed if you or your dog get into a tangle with a porcupine.

Fun Fact: A porcupine can remove another porcupine’s quills by grasping them with their incisors and using its front feet to push off.

Porcupines have short, powerful legs with large flat feet and thick, strong, curved claws on each of their toes. Porcupines are short and stout and a bit cumbersome when walking on the ground, but they are excellent climbers and enjoy spending most of their time in trees. The porcupine’s eyesight is poor, but it has an excellent sense of smell and hearing. Like other rodents, it has two large front teeth that grow continuously throughout its life. A porcupine has to constantly gnaw on things to keep those teeth at a manageable length!

Porcupines can produce a wide array of vocalizations, including shrill screeches, coughs, groans, chatters, whines, and low grunts. Click here to listen to an audio recording of a porcupine squeal.

Porcupines are herbivores, meaning they are vegetarians.  They primarily feed on vegetation and the bark of trees. Their diets vary from winter to summer based on what food is available. Typically porcupines forage on shrubs, crops, wildflowers, clover, leaves, acorns, tender twigs, roots, seeds, buds, and leaves in spring and summer. In winter, they eat needles and the bark of trees. They have a natural desire for salt and will search for salt at natural salt deposits and along roadsides. They also really love to gnaw on the dropped antlers of deer for the salt and minerals. This natural desire for salt sometimes leads porcupines to cbew on man-made items like canoe paddles, axe handles, or pretty much any item that has been soaked in human sweat, which contains salt.

Porcupines are generally found in coniferous forests but can also inhabit mixed or deciduous stands in search of food. Adult porcupines have a home range of 6 to 14 acres depending on food availability. A porcupine will tend to stay in the same home range and reuse the same den year after year. Porcupines are solitary by nature but may den with other porcupines in the winter.

The porcupine does not hibernate but remains somewhat dormant for the winter months and stays in its den during bad weather. Porcupines may build a nest but also might den in a hollow log or tree, rock ledges, abandoned burrows of other animals, under stumps or blown down trees, or even under buildings. Porcupines are primarily nocturnal, mostly active at night, but will forage during the day. When not seeking cover from the weather or fishers, who are one of the only predators of the porcupine, it spends most of its time in the trees feeding and resting.

Fun Fact: Philip, CELT Education Coordinator, knows a porcupine that stays in a den under his neighbor’s outhouse. Must be stinky!

Between September and December, porcupines break their solitude and seek out other porcupines to mate with. A female porcupine is pregnant for about seven months and generally gives birth between April and June. A baby porcupine is called a porcupette and typically weighs approximately one pound. 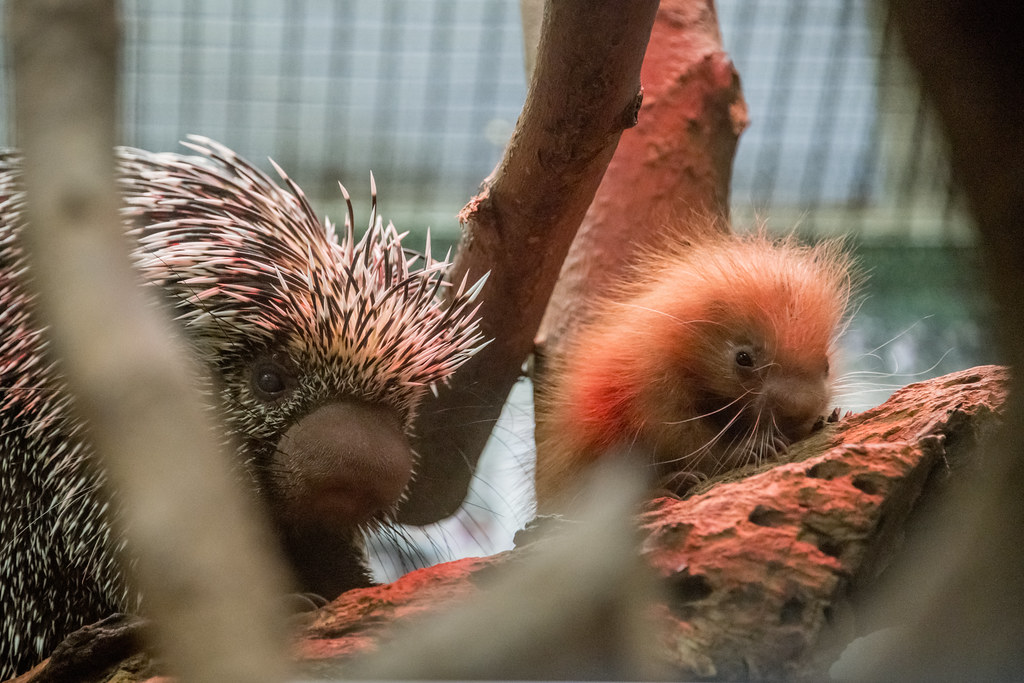 Despite being so small, porcupettes are precocial, meaning they are quite well-developed and self-sufficient at birth. Their eyes are open, their teeth are well-formed. Their sense of smell and hearing develops rapidly, and they possess a full set of quills that are soft at birth but harden within an hour. Within two weeks, porcupettes are eating vegetation and only nursing occasionally, and they are fully weaned at three months of age. The porcupette is fully independent by the age of six months. 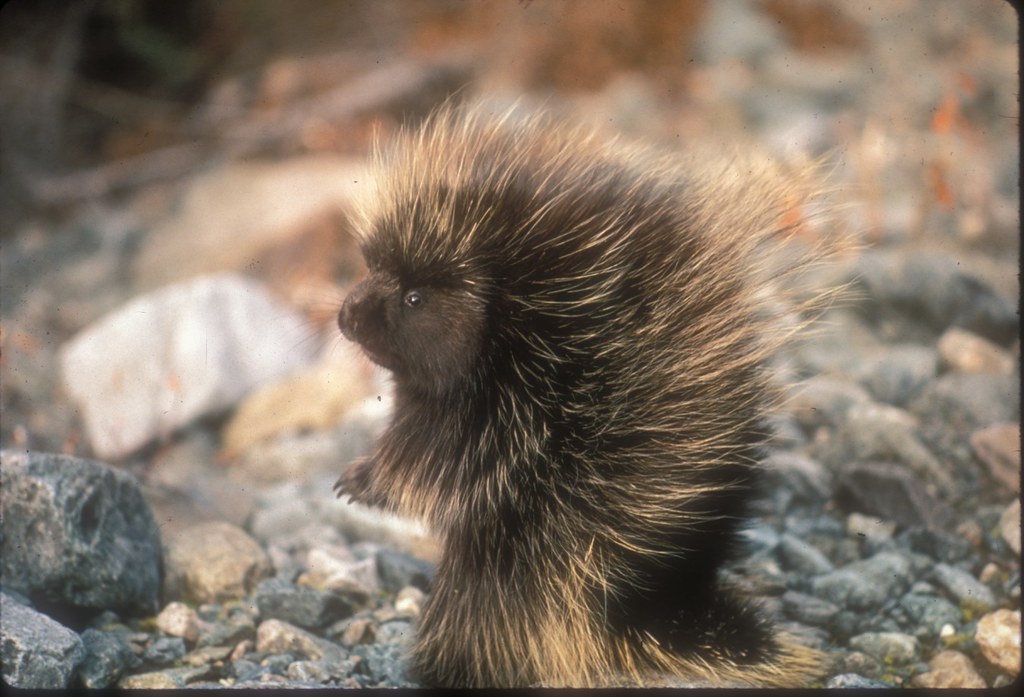 This time of year you might find a porcupine nibbling on an ear of corn, enjoying a fallen apple, or resting in a tall tree. If you’re lucky enough you can observe a porcupine, from a safe distance of course, and appreciate its unique adaptations.