Wild turkeys are quite impressive birds! Ben Franklin famously praised the wild turkey as a better national symbol than the bald eagle. Franklin viewed the eagle as a coward, especially compared with the wild turkey who can fly up to 60 miles per hour and distances of more than a mile, can, in a sprint, outrun a galloping horse for a short distance. Turkeys are strong and clever, especially if they need to defend and protect their young. But sadly, even as Franklin defended the noble turkey in his writings, it was vanishing from the New England countryside. Overhunting and habitat loss decimated turkey populations until they were all but lost to New England in the early 1800s.

Efforts to bring back the wild turkey to Maine began in 1942 when Fish and Game officials released 24 birds on Swan’s Island in Penobscot Bay, but the birds did not do well on the island. In the1960s, fish and game clubs tried to transplant birds to Bangor and Windham, but those populations failed as well. In 1978, Maine Fish and Wildlife biologists brought 41 wild turkeys from Vermont and released them in the southernmost towns of York and Eliot. Finally, the populations survived, and Fish and Wildlife was able to continue transplanting the birds north. Today, Maine has around 60,000 turkeys, to the delight of both hunters and nature lovers but to the dismay of some who feel they can be a nuisance. 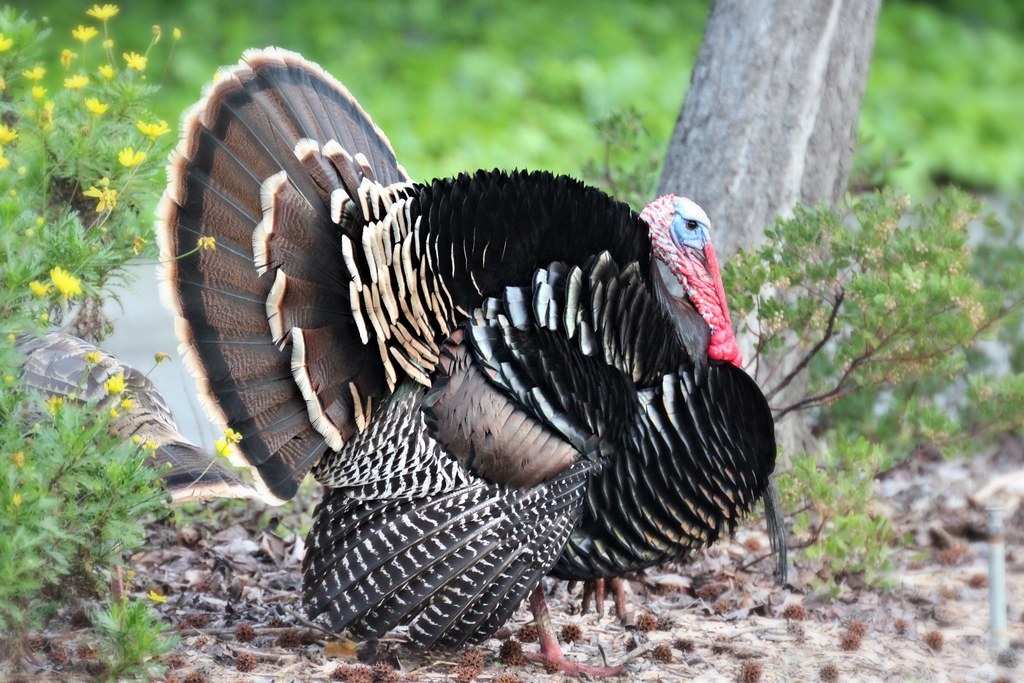 The wild turkey is the largest upland game bird in North America with average adult females, or hens, weighing 8-12 lb and adult males, or toms, weighing 10-20 lb. The largest toms can weigh in at over 25 lbs! The heads of gobblers (adult toms) are generally bare and blue with a hint of pink and red, but colors can change with the mood of the tom. Heads of hens are somewhat feathered with smaller, darker feathers extending up from the back of the neck. The legs of toms are longer than the hens and are equipped with spurs. The width of the footprint ranges from around 4 in for a hen to 6 in for a tom. Wild turkeys have very keen eyesight and acute hearing. They are also agile fliers, though they will often walk or run from danger at first. 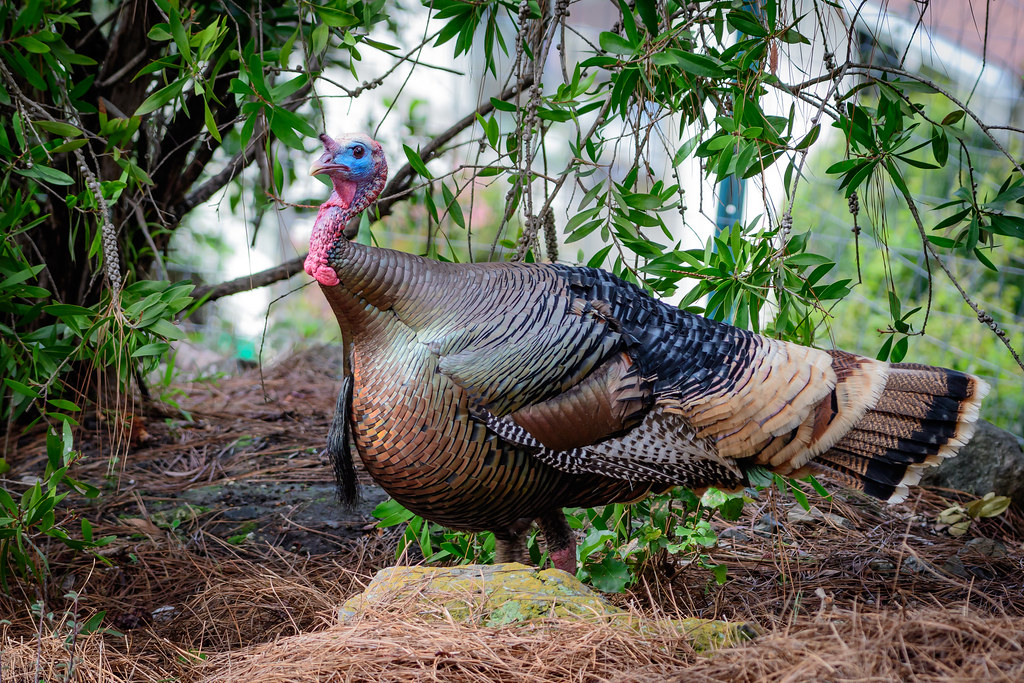 In New England, wild turkeys generally require large tracts of mature hardwoods, particularly nut-producing species such as oak and beech, interspersed with stands of mature pine. Wild turkeys feed on a wide variety of animal and plant materials such as insects, greens, fruits, berries, seeds, grains, and nuts. During the winter turkeys feed on bayberry fruits, sensitive fern spore heads, burdock seeds, and other vegetation that can be found around spring-fed brooks as well as bare edges of fields. In Maine, turkeys have also depended on dairy farms for food to survive winter. Dairy farms provide silage corn and manure containing undigested corn that is either spread on fields or stockpiled for future spreading. Turkeys can travel several miles in a day while feeding.

In addition to forests, wild turkeys also need grassy openings such as hay and pasture lands for raising their young. The hens build the nests within a depression on the ground usually hidden at the base of a tree or within brush. They will lay eggs between April and May, laying one egg each day for up to 10-12 days. The eggs are incubated by the hen for 26-28 days before hatching. If left unguarded, eggs are vulnerable to predators such as crows, skunks, raccoons, and red squirrels. Hens sitting on the nest can fall prey to dogs, coyotes, foxes, raccoons, bobcats, fishers, and even great horned owls. 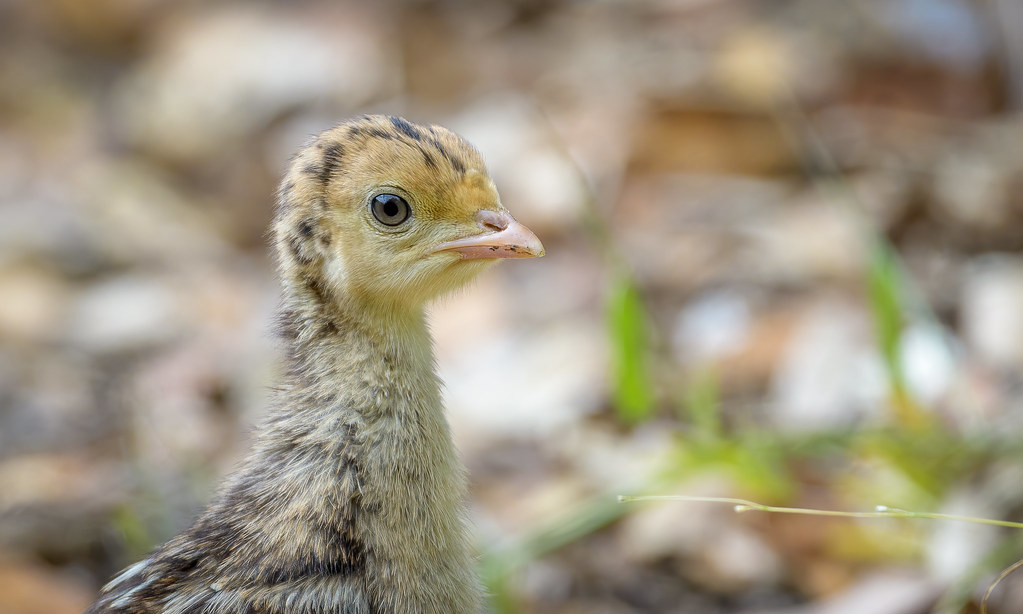 Poults, or baby turkeys, usually leave the nest the day they are hatched. Hens and their broods spend their days at field edges and forest openings in search of insects, which provide the protein the poults need for rapid growth during their early development. After 5-6 weeks of age, young turkeys begin roosting in trees, thus greatly reducing their vulnerability to predators. Turkeys are most vulnerable in their early stages of life – if they can survive these first few weeks they are likely to live as long as 10 years. During late summer, fall, and winter, hens and their poults will join other hens and poults to form flocks of 6-25 birds. Occasionally, these flocks will grow to almost 50 birds! Adult toms generally remain alone, but small groups of 2-5 toms of mixed ages are commonly seen throughout the year except during breeding season.

What about the turkey that you might eat on Thanksgiving? Unless it came from a hunter, that turkey is a far cry from the wild turkeys that once thrived all through New England. The farm-raised, domestic turkey has long lost its ability to fly, thanks to selective breeding. This process also created a heavier, broad-breasted bird with shorter legs and none of the skills and adaptations of its wild cousins. It might even taste different, with a more mild, buttery taste compared to the gamey flavor of wild birds.

When you see a turkey this Thanksgiving, be it in the wild, on a decoration, or for dinner, remember that although wild and domestic turkeys are genetically the same species, that’s about where the similarity ends!