The other day I looked out my window towards my yet-uncut garden and found a large flock of goldfinch feasting on the remains of black-eyed Susan seeds. It took me a minute to be sure they were in fact goldfinches, given their dull winter plumage. 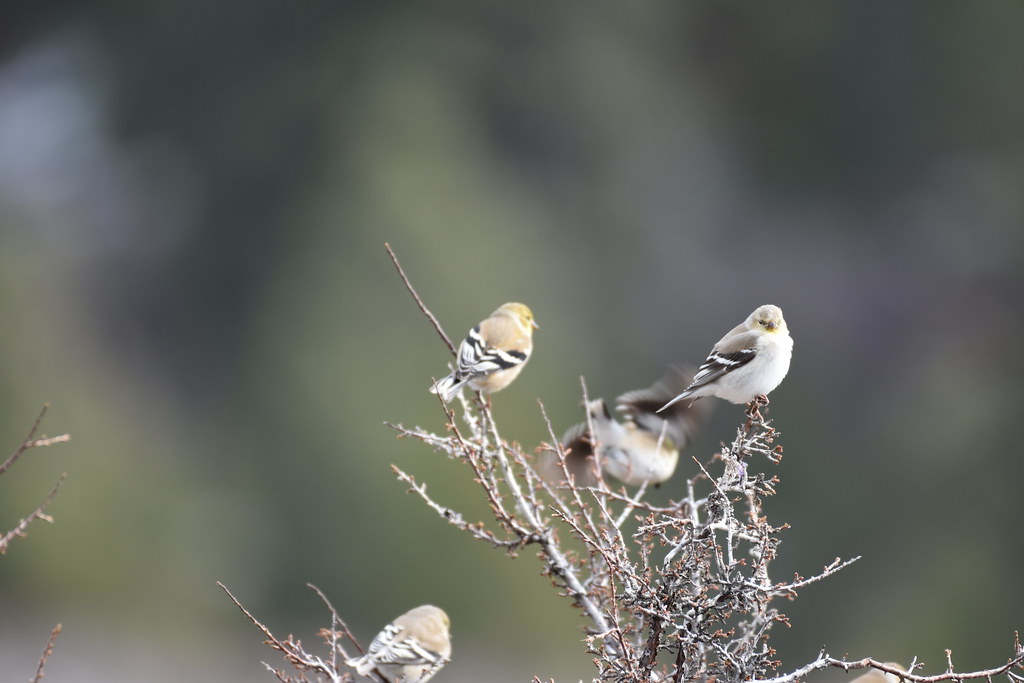 I don’t recall seeing goldfinches in Maine over the winter. Have I just not been paying close attention? Have they always been here, and I just confused them with other species due to the lack of their distinctive bright yellow summer feathers?

I felt like I saw way more bluebirds in my yard this year than I did in years past, and the flocks of robins seemed to get bigger and bigger. Was this just me or was something going on? I began to research these changes. I soon realized that a better first question would be: How do birds survive a tough Maine winter?

Some birds, like many of our warblers, some sparrows, vireos, thrushes, and many more, avoid the Maine winter by migrating to warmer climates. Different species of birds begin the migration at different times leading up to winter. For most bird species, the timing depends on when their food sources begin to disappear and when the temperatures get cold enough that they begin to struggle to keep warm.

But while many birds in Maine do migrate, anyone who spends time walking in the woods or maintains a backyard bird feeder will tell you there are many bird species who are able to tough out a Maine winter. These year-round residents have impressive adaptations for staying warm, finding food, and surviving a Maine winter.

Fun Fact: A couple of species of birds, like the snowy owl, actually migrate to Maine for the winter!

First off, birds have to maintain an elevated body temperature, about 105 °F. In the winter, their food sources are significantly reduced but needed more than ever in order to keep warm. Their strategy? Maximize calories ingested while minimizing calories spent.

Birds retain heat in their body core by fluffing out their feathers. Chickadees, for example, may appear to be about twice as big in winter as they appear in summer. They appear this way due to fluffing up their feathers, thickening the insulation around their bodies. It’s the idea behind the “puffy” down or synthetic coats that some of us use to keep warm. 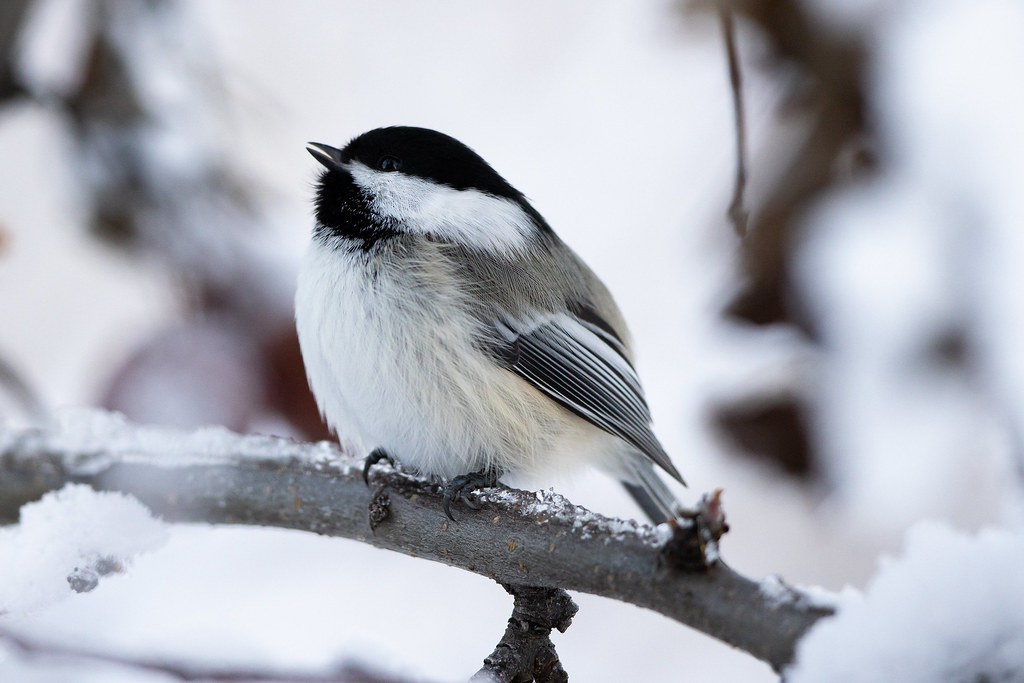 Nighttime is often a critical time for winter survival because no food calories are coming in to replace those being expended. Most birds reduce heat loss at night by seeking shelter in tree holes or other crevices and by reducing their body temperature. (The smaller the difference in temperature between the bird and the air, the lower the rate of heat loss.) Shivering is another adaptation allowing certain bird species, including the golden-crowned kinglet, to generate heat. The bird may have to shiver all night just to stay alive. This process burns up fat reserves, which must be replaced the next day for the bird to survive the next night. It is a tight energy balance for the bird, but by lowering body temperature and turning down heat production at night, chickadees and other small songbirds do their best to make the cushion of fat accumulated during the day last through the night. 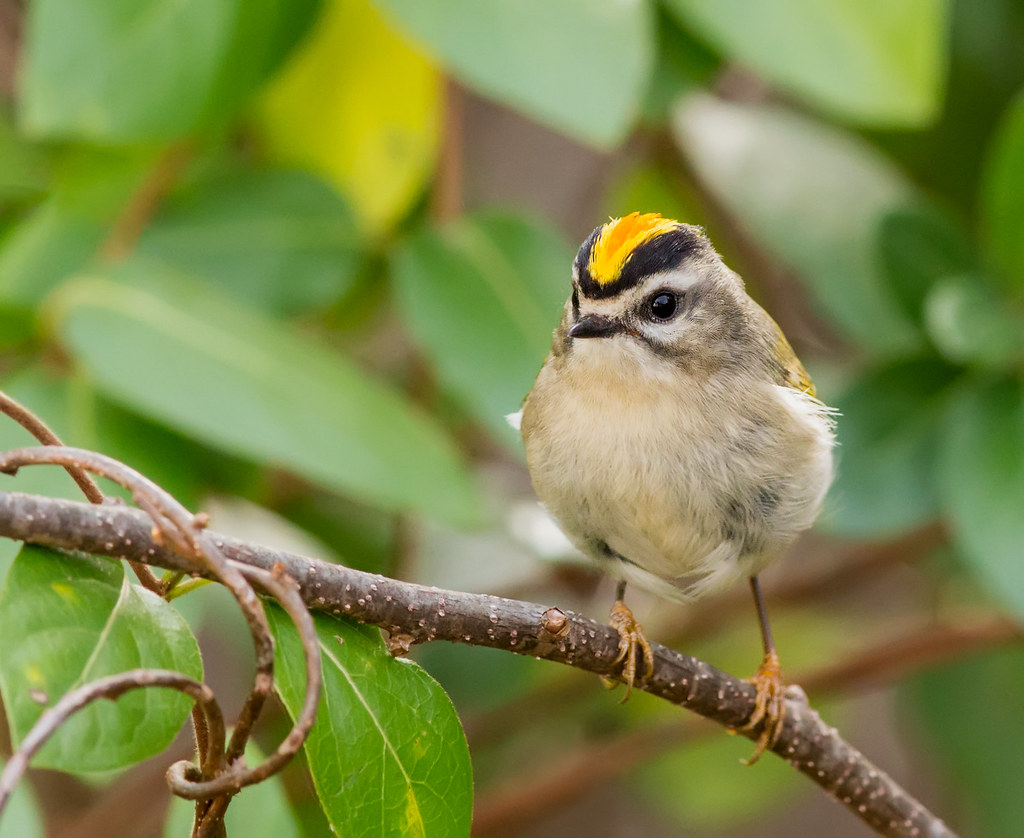 Our winter birds are both less picky and more ingenious when it comes to winter food sources.  Our wintering songbirds will look for seeds and berries anywhere they can find them as well as insects and even spiders. While our adult insect population is mostly absent in the winter, insect larva and eggs can be found inside trees, sometimes just under the bark or imbedded in the leaves. Woodpeckers, who feed on burrowing insects and their eggs and larva year-round are experts at finding and extracting these food sources with their drill bit-like beaks and long, sticky tongues.

Compared to the smaller songbirds, ruffed grouse have it easy! They are primarily ground birds but can fly well over short distances. This comes in handy in the winter, when they will fly to the tops of aspens, poplars, and birches to eat nutrient-packed buds. Ruffed grouse can pick and eat enough buds in about 15 minutes to get them through the day, then another 15 minutes at dusk to get through the night! (Compare this to the chickadee, who needs to feed constantly throughout the day to then just barely make it through the night.) 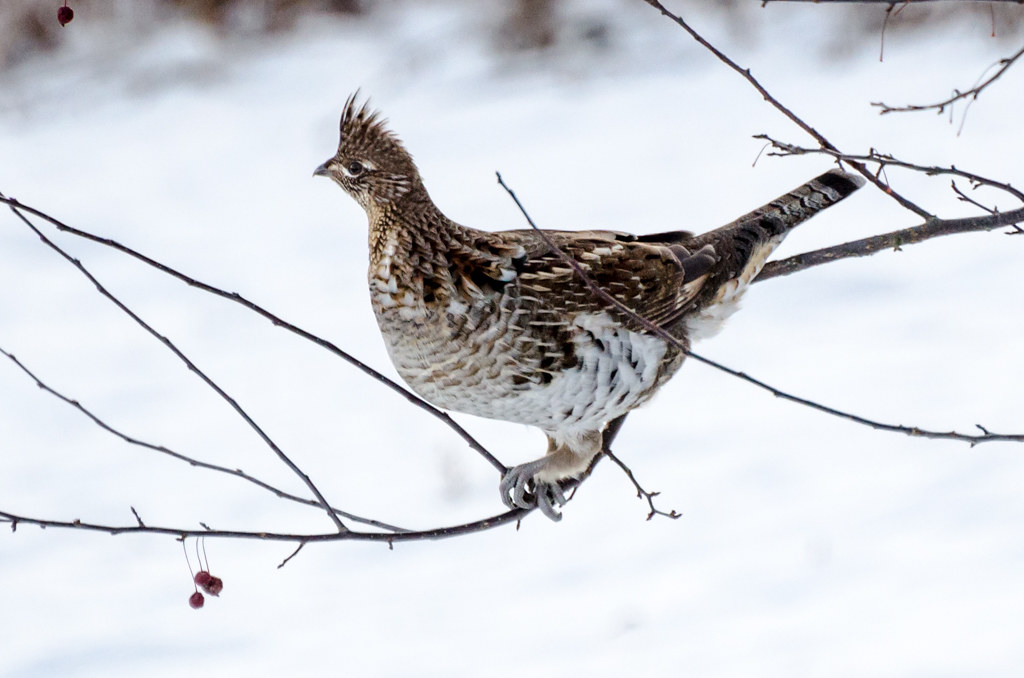 Ruffed grouse stay warm using their feathers as insulation as well as spending parts of the day and all night hiding out in snow dens. Ruffed grouse have brown-colored feathers year-round and are therefore not well camouflaged when snow is on the ground. This makes them an easy target for predation. Snow dens not only help them stay warm but also give them protection from predators such as foxes, fishers, bobcats, and large raptors.

It is impressive to think about the adaptations and tenacity that birds in Maine have for surviving the winter. But are we seeing more and more birds spending their winter here in Maine? I couldn’t find any statistics on the whole bird population. For most individual species, the number of birds spotted in winter seems to depend mostly on food availability.

In some cases, however, larger changes in the environment are affecting which birds are most abundant. One example is the eastern bluebird, which is expanding its winter range northward, which is why we are seeing more bluebirds each year. Habitat is changing in Southern Maine as suburban sprawl fragments the forests and creates more edge habitat where bluebirds thrive. Backyard bird-watching and bird-feeding are increasingly popular with more people offering good food for bluebirds in their feeders. 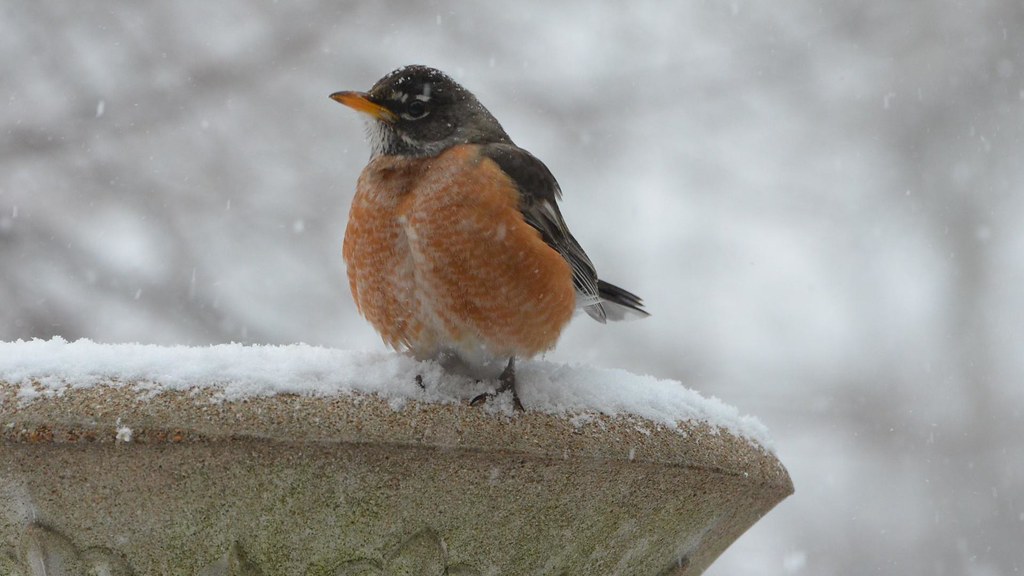 As for robins, they are not really a sign of spring here in Main. Instead, we see them year-round, although it is likely that the individuals you see in winter will migrate further north for the summer.

And what about the goldfinches I saw eating in my garden? They too will stick around for the winter if it doesn’t get too cold and if there isn’t too much snow, and only head farther south if the winter gets too severe. As our winters continue to get milder, expect more goldfinches to stick around.

If you’re interested, here are some great resources to learn more: