Black bears are almost as iconic to Maine as moose and lobster! At once fierce and adorable, they have won the hearts of many—think the University of Maine Black Bears or Robert McCloskey’s beloved book Blueberries for Sal. I have only seen a black bear once in the wild—and if I’m being honest, it was in New Hampshire—but it was still amazing!

The black bear is the smallest of the three species of bears living in North America and has the widest distribution on the continent. Black bears can be found in most forested areas from Mexico north to the edge of the tree line in Canada and Alaska. It is the only species of bear present on the East Coast.

Adult male black bears average between 250-600 pounds and measure about 5-6 feet from the tip of their nose to the tip of their tail. Females are smaller, weighing 100-400 pounds and measuring 4-5 feet in length. The large variance in a bear’s weight is due to the significant amount of weight they lose during the winter. Male back bears stand about 40 inches tall at the shoulder while females seldom exceed 30 inches in height.

Black bears in Maine are, well, normally black, but in other parts of the country, they can have various shades of brown to cream coloring particularly in western populations. In coastal British Columbia and Alaska, they can even be white and blue-gray in color, though none are quite as pale as a polar bear.

Fun Fact: Bears can run at speeds of up to 35 miles per hour.

Bears are omnivores and opportunistic eaters meaning that they feed on a wide variety of vegetation and animals depending on what is available. Although bears do eat some meat, their diet is primarily vegetarian and includes early greening grasses, clover, and the buds of hardwood trees in the spring, fruits and berries in summer, and beechnuts, acorns, and hazelnuts in the fall. Their diet is supplemented with insects, the occasional mammal, and birds as well as carrion (dead animals). Bears are intelligent creatures and can rapidly adapt to new food sources; in fact, black bears have the most flexible diets of any bear species in North America.

Despite popular belief, bears are not true hibernators. Instead, in late fall when the temperatures drop and the days become shorter, bears enter a state of dormancy called torpor. During this period of time, the bear’s body temperature and metabolic rate drop as a way of conserving energy. They don’t eat, drink, or excrete waste but are more easily awakened than “true” hibernators.

This is also why a bear’s weight fluctuates so much. Bears spend summer and fall eating as much as they can in order to store up enough fat in their bodies to sustain them through the winter. Studies have shown that bears will lose about 25 percent of their body weight and 29 percent of their muscle strength during the winter. When they awaken in spring, bears enter a period of food stress, as they are very hungry but food sources are not abundant. 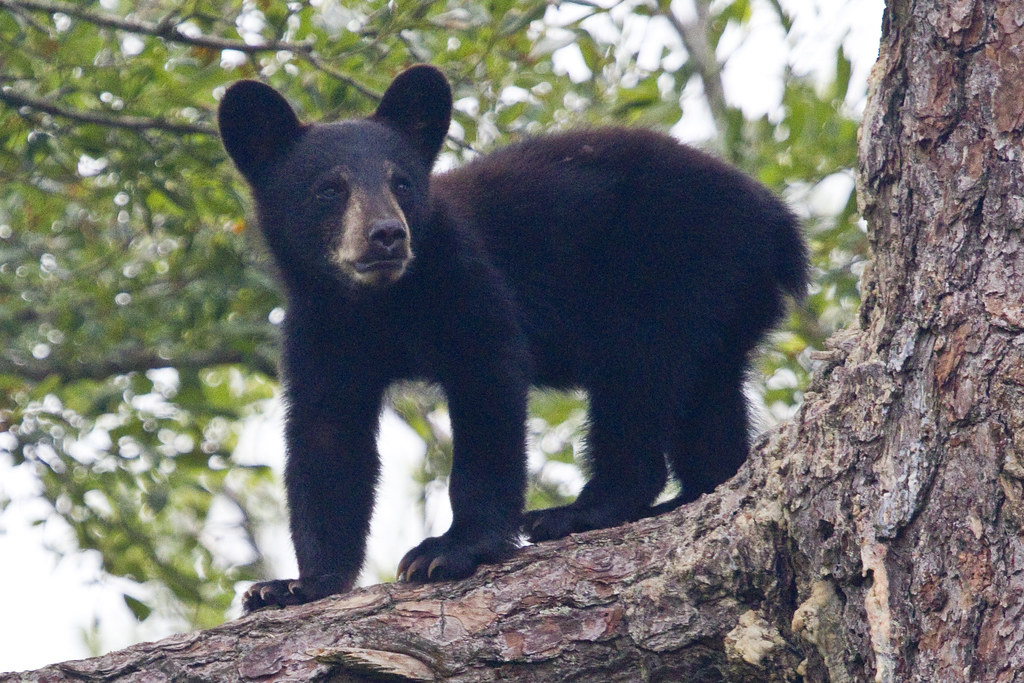 In January and February, female black bears temporarily awaken from torpor to give birth to 1-4 cubs while in the winter den. Bear cubs are born with blue eyes, which turn brown during their first summer. They weigh less than a pound at birth but can grow to over 100 pounds in their first year if food is abundant. Cubs typically remain in their mother’s care for 16-18 months and full maturity in 3-5 years.

The Maine Department of Inland Fisheries & Wildlife has operated a bear monitoring program since 1975. Using tracking equipment to locate female bears that have been outfitted with radio collars, biologists from IF&W visit more than 75 female black bear dens each winter.  These visits allow biologists to collect important biological data, including how many cubs are born and how many cubs survive their first year of life.  During these visits some female cubs are fitted with a tracking collar to be monitored in the coming years. The bears are also weighed and have blood samples taken.  This ongoing program is part of the country’s longest running bear study.

For more information on bears visit the Maine DIF&W website.